Jamie and Stacey Gillis brought home a wonderful Christmas present for Gibson, their 5-year-old Olde English Bulldogge.  Taylor, an insightout puppy, joined their happy family on December 17, 2011. The next morning we were delighted they shared this video of the happy pair.

On December 29th we received the following email update.

Thanks very much for Taylor’s papers and the Christmas card. We had a wonderful Christmas Day. However, on the day after Christmas Gibson started throwing up and walking strangely – with his back arched. He couldn’t get comfortable and was obviously in pain. He threw up a piece of a rubber toy but when he still didn’t seem to be feeling better we took him to the vet. They performed an X-ray and an ultrasound and it showed that he had a couple of foreign objects in his digestive tract – They turned out to be pieces of “Kong” type rubber. One was lodged in his stomach and one had passed all the way through his intestines and was lodged In his colon.

They gave him a sedative and we spent 15 minutes with him while it took effect. It broke our hearts to watch him go to sleep not knowing if he’d wake up. They performed surgery and removed the foreign objects on the 27th and he has been recovering at the hospital ever since. He seems to be getting better each day and his intestines, which were very irritated and inflamed, seem to be calming down. We are hoping to be able to take him home this afternoon as I am sure he will eat and sleep much better at home than in the ICU at the pet hospital.

We thought you and Dave might like to know. We have our fingers crossed for him and he’s a tough little guy and is certainly a fighter. I hope your Christmas has been better than ours! Thanks for everything and Happy New Year, we’ll keep you updated on Gibson.

Jamie and Stacey acted fast and saved Gibson’s life.  A dog swallowing foreign objects is quite common.   Vomiting is the most common symptom of intestinal blockage.  Dogs that start vomiting, appear listless or appear to have abdominal pain, are not interested in food, have bloody or tarry stools, strain to eliminate or just do not act normal, should be seen by the vet immediately. 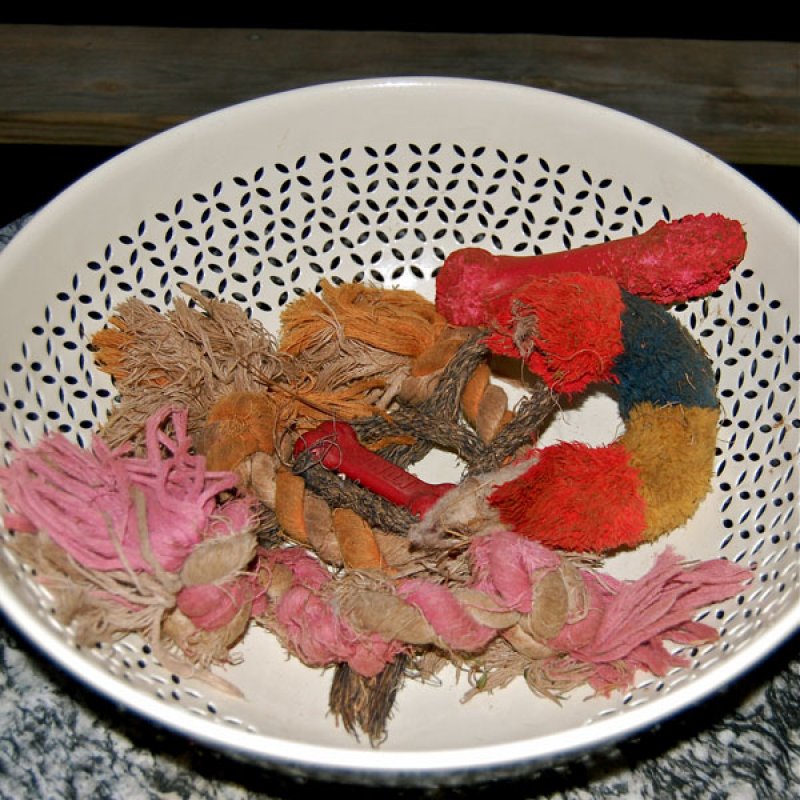 A linear object, like a string, can eventually dig into the sides of the intestine and can rupture the bowel in several places.  Another reason linear objects are more dangerous is they can cause only a partial blockage, so food and water can still pass through, and go unnoticed for a while.  Linear objects can do more damage to a greater amount of the bowel.  They are also harder for a vet to diagnose.

Thank you Jamie for sharing Gibson's story.  It prompted me to remove the questionable toys in the play yard.  This is what I picked up!