At insightout we are constantly looking to improve the health of our dogs. Emmett, our boy who first motivated us to research diet, is getting up in years. He is an English bulldog mix with many orthopedic problems.   Emmett has hip dysplasia in both hips and repaired torn cruciate ligaments in both knees. Emmett received a total hip replacement in his left hip at the tender age of two. During the following years we traveled to Europe several times to visit our son stationed over seas.  It was those visits  that we noticed a difference in the manner Europeans care for their pets. We found the dogs in Europe live on average 5 to 10 years longer than American dogs. This unsettling fact prompted research on diet and it’s effects on longevity.

We found that the main ingredients of most commercial dog foods are grain based and the process for cooking and packaging the food kills most of the nutrients. In the USA we have our dogs eating foods they are not equipped to digest. The digestion of commercial dog food is taxing and difficult on a dog’s system.

Through much research we discovered the raw meat diet. I must admit, in the beginning I was very skeptical. I was indoctrinated into the belief that the pet food industry had the health of our pets at heart. I was wrong. The pet food industry is in business to make money. The general consumer wants the best deal, which usually means cheapest. This is not a good combination for the health of your dog.

Over a period of time we were convinced to move to a raw diet for our dogs. During that time we had many trips back to Texas A & M for Emmett’s surgeries and follow-ups. We met surprising resistance from the vets about feeding raw. We challenged them with the strong argument that Emmett’s health had improved.  Texas A & M did a complete blood analysis. Emmett’s perfect blood analysis helped to substantiate our claim. The Texas A & M dietician confirmed that raw diet was indeed the best for our canine companions. Her only concern was the possible contamination of the raw foods due to poor storage, preparation and cleanliness. We take care to keep our food fresh and preparation areas clean and we have not had any problems.

At insightout we started with a completely raw diet in the beginning. As the kennel grew and the number of dogs increased, it became very difficult to store the quantity of meat we needed. The time it takes to weigh and measure each meal for each dog became an issue. Due to the space and time restraints we moved our dogs to a combination of quality grain free commercial food, raw meat and dietary supplements. . 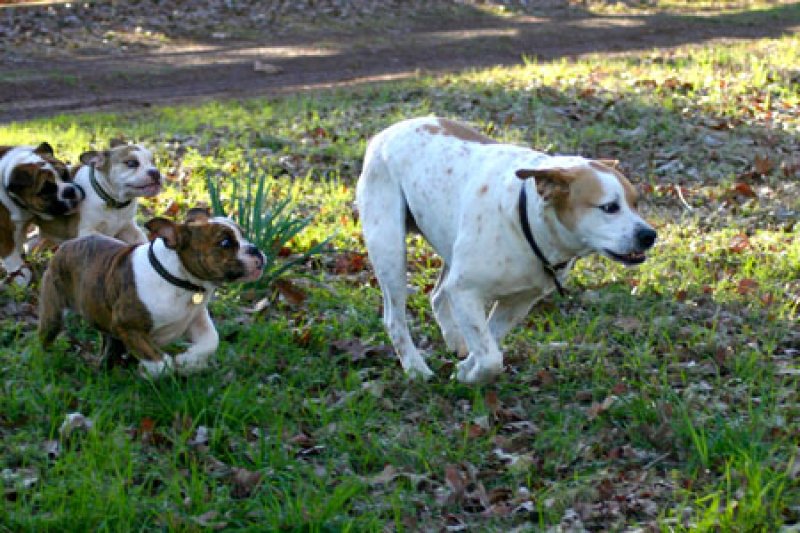 As our sweet Emmett has aged his mobility has decreased.  The disturbing reality of Emmett’s decline and our commitment to give him every chance to live out his life as well and active as possible prompted us to return him  to a totally raw diet. Even with our knowledge of the wonders of raw feeding we were surprised at the difference it made. His spirits and activity level improved.  He was generally happier, trotting and kicking like the Emmett of younger days.  He just felt better. We were very thankful to see such a noticeable change.

Here is the kicker.  Due to other demands on our time we ran low on raw meat and added commercial food to Emmett’s diet.  It was like we had drugged him. He became lethargic and his mobility decreased substantially. It was amazing the effect the commercial food had on him.  We quickly returned him to a totally raw diet.  His energy level was immediately restored and the improvement of his overall well being was evident. He became more animated, loving, less grumpy and raring to go. Wow!

I am not a vet, but from personal observation and experience I am convinced the raw diet is the best thing you can do to benefit the health of your dog.